Size and mass distributions of particles and polymers

Truly monodisperse particles or polymers are rare. Examples of such systems, where all constituents are molecularly identical, are clusters of relatively small number of atoms (e.g., buckminsterfullerene) or proteins with a well-defined sequence of amino acids. Typically, however, colloidal particles, nanoparticles, polymers, or biomacromolecules are polydisperse, meaning that in a sample one finds a distribution of similar objects, which vary in size and mass, possibly in shape [1]. When the systems are composed of one type of material, they are often referred to as homogeneous, while systems containing different types of materials called heterogeneous. One may discuss size distributions in the latter systems as well. These notions are illustrated in the figure below.

Size distributions can be relatively narrow, and in such situations one may neglect polydispersity effects to a first approximation. Various types of particles can be fabricated in close to spherical shape and with small degree of polydispersity (e.g., latex, silica, gold). Various types of polymers with low polydispersity can be synthesized as well (e.g., polystyrene) [2]. More frequently, however, size distributions have a finite width, and can be extremely wide, sometimes covering many orders of magnitude in size or mass. In such cases, various system properties are dominated by polydispersity effects. Such systems can be heterogeneous too. Naturally occurring particles or polymers often fall into that class (e.g., dust, soil, polysaccharides, humic substances) [3,4]. While this essay only focusses on size distributions of particles and polymers, similar notions can also be used to discuss size distributions of other objects, such as colloidal aggregates, stones, animals, stars, or galaxies.

Consider homogeneous and spherical (or at least approximatively spheroidal) particles, which can be characterized by the radius R of an equivalent sphere. In a given size range, there is certain number of such particles per unit volume, namely n(R)dR in the range of radii R and R+dR. The total number of particles per unit volume N, which is also referred to as the number concentration, is given by

The corresponding number weighted size distribution can be thus expressed as

This function is a probability distribution as it is normalized to unity by virtue of the relation given further above. A similar probability distribution can also be introduced for non-spherical objects, whereby one defines its radius in terms of the radius of an equivalent sphere with the same volume. For strongly non-spherical objects (e.g., rods, platelets) one should rather consider multi-variate distributions of the different object dimensions (e.g., length, width, thickness). That scenario can be relevant, but will not be discussed here.

The (molar) mass of polymers is more easily measured than its size, and for this reason one rather refers to mass distributions. In analogy to the above definition, one discusses the number of such particles in a given mass range, namely n'(M)dM in the range of masses between M and M+dM. As a consequence, one may introduce a number weighted mass distribution denoted by

For spherical particles, their mass and radius are obviously related through the density of the particle. A similar relation also applies for other objects, and thus we consider

For such objects, an equivalent radius must be appropriately defined, for example, through its gyration radius. From the above relation, one finds that q(M)dM = p(R)dR and thus that q(M) ∝ p(R) R / M. The proportionality constant can be found by normalization.

When discussing size distributions, researchers often refer to the mass weighted size distribution. Thereby, one considers the mass of particles per unit volume M(R) n(R) dR within a given interval R and R+dR. The resulting probability distribution reads

where α = 3 must be used for compact objects. The special feature of particle size distributions is that one must also be able to normalize the mass weighted distribution, since the sample has a finite mass. This condition represents a constraint on possible choices of valid size distributions.

or the oversize fraction

Again, different weights for these cumulative fractions can be used. Similarly, one may consider the mass weighted mass distribution, which is obtained from

where ⟨ ... ⟩ denotes the expectation value. Among these moments, the most important ones are of order one and two. The first moment corresponds to the average radius given by ⟨R⟩ and it characterizes the average particle size. The second moment is related to the relative width of the distribution through the normalized standard deviation εR, which is also referred to as the coefficient of variation or polydispersity, and is normally expressed as

This equation also introduces the size polydispersity index DR. We already mentioned the characteristic feature of particle size distributions, namely that its mass weighted distribution must be normalizable. This condition is equivalent to the condition that the moment ⟨Rd⟩ is finite.

Similar moments can be defined for the mass distribution. The average mass ⟨M⟩ is also referred to as the number weighted average mass denoted as ⟨M⟩n. The condition that mass weighted mass distribution is normalizable implies that the first moment ⟨M⟩ must be finite. The polydispersity can be again expressed in terms of the normalized standard deviation εM or the mass polydispersity index DM as

where Mn(0) refers to a monodisperse sample containing only particles or polymers of radius ⟨R⟩. The mass polydispersity index becomes

The second equation signs are valid for any size distribution with sufficiently small polydispersity and can be obtained by expanding the arguments in a Taylor series around ⟨R⟩. Indeed, the mass polydispersity is larger than the one by size, and for not too polydisperse samples, one has εM = d εR.

A normal (or Gaussian) distribution is unsuitable to model size or mass distributions. The reason is that this distribution always yields a finite probability for negative arguments, which is incompatible with the fact that the particle radii or masses are always positive. However, this problem can be remedied by assuming that the logarithm of the radius follows a normal distribution, which leads to the log-normal distribution [6]

where v = ln (1+εR2) and μ = ln ⟨R⟩-v/2. The advantage of this distribution is that its moments can be simply expressed as

where α is the (possibly fractional) order of the moment. Another suitable size distribution is the exponential (or Schultz) distribution [7]

where Γ(x) is Euler's gamma function. Note that the log-normal and exponential distributions can be approximated by a normal distribution for sufficiently small polydispersities.

Such distributions are illustrated in the figure below. The left panel shows the exponential distribution for an average radius of 10 nm and different size polydispersities. The other panels show the resulting mass distributions for two different situations. The middle panel shows the resulting mass distribution for spherical and compact silica particles with Mn(0) = 6567 kg/mol (d = 3). The left panel shows the analogous situation for polystyrene in tetrahydrofurane, which is a good solvent with Mn(0) = 100 kg/mol (d = 1.7) [8]. For the polymer, the radius is defined as the gyration radius. One observes that the mass polydisperties are larger, especially for the compact particles. 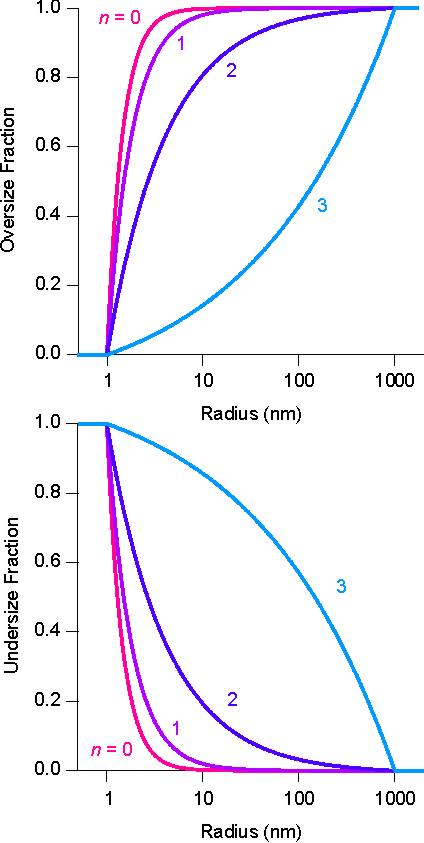 where δ is referred to as the fragmentation fractal dimension. In this situation, this distribution cannot be easily normalized, and the particle mass may also diverge. To avoid these problems, one assumes that this distribution is only valid in a finite range of radii between Rmin and Rmax. In this case, the moments can be again calculated explicitly. In practical situations, these cut-off radii may differ by many orders of magnitude. These cut-offs can be also achieved by smooth functions, for example, by exponential functions or power-laws with different exponents [4].

The undersize and oversize fractions shown on the right illustrate the special features of the power distribution. The fragmentation fractal dimension is taken to be δ = 2.7 as is often the case for size distributions of naturally occurring particles [4]. The cutoff radii are chosen to be Rmin = 1 nm and Rmax = 1000 nm. One observes that the largest contribution to the particle number occurs at Rmin while the one to the particle mass at Rmin. Therefore, entirely different parts of the size distribution dominate these characteristics.

where Mw(0) refers to a monodisperse sample containing only particles or polymers of radius ⟨R⟩. Given this definition the mass polydispersity index can also be expressed as DM = Mw/Mn. In static light scattering, the (molar) mass is obtained from the scattering intensity extrapolated to low concentrations and small scattering angles. In ultracentrifugation, one measures the equilibrium sedimentation profile by light absorbtion, and from the dependence of the concentration profile from the distance from the rotation axis, the (molar) mass can be extracted. Note that the average ⟨M3⟩ / ⟨M2⟩ can also be relevant in ultracentrifugation, provided the concentration measurement was carried out through the refractive index. However, this measurement technique is hardly used today anymore.

Static light scattering can be also used to measure the gyration radius, which is obtained from the dependence of the scattering intensity on the scattering angle at small angles. The respective average for a polydisperse sample is given by

where Rg(0) is the gyration radius of the respective monodisperse sample. With dynamic light scattering, one measures the diffusion coefficient, which can be expressed in terms of the hydrodynamic radius by means of the Stokes-Einstein relation. In this case, the relevant moments for a polydisperse sample are

where Rh(0) is the hydrodynamic radius of the monodisperse sample.

Measurements of the viscosity of the polymer solution is another popular way to obtain the molecular mass of polymers. Thereby, one investigates the Staudinger index (or the intrinsic viscosity) [η] for different molecular masses, which obeys the power-law relationship [2]

where Mη is the viscosity averaged (molar) mass and A is a constant. The exponent γ is actually related to the mass fractal dimension of the polymer through γ = 3/d-1. The respective average of the molar mass is given by

where Mη(0) refers to a monodisperse sample containing only particles or polymers of radius ⟨R⟩. Note that the molar mass cannot be determined by means of the viscosity method for compact objects (d = 3). However, this limit is well behaved for the averages above. 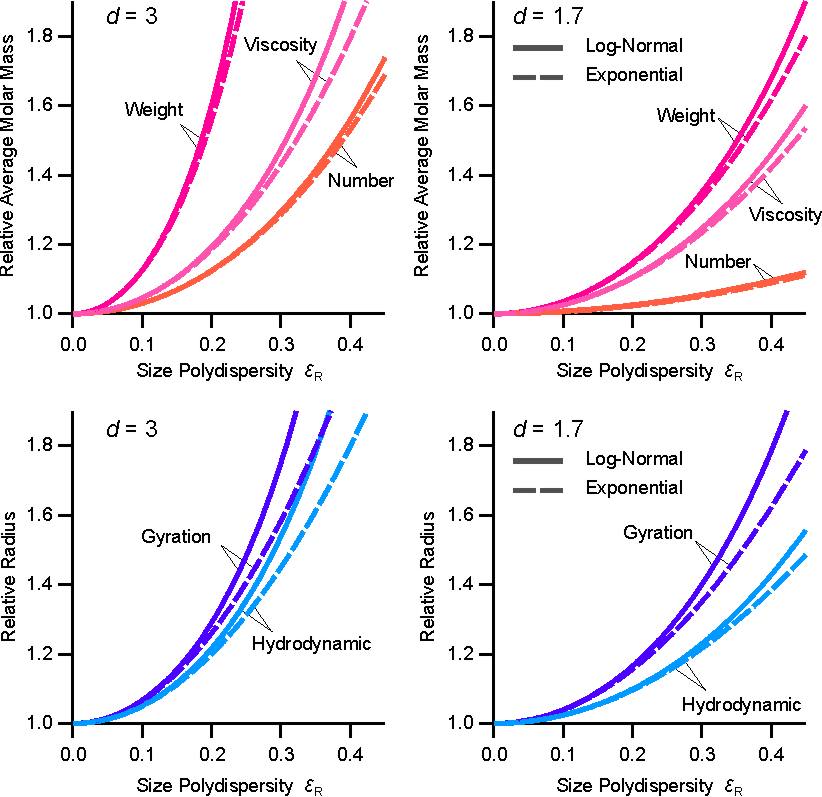 The dependence of these different averages on the size polydispersity εR is illustrated for the log-normal and exponential size distributions in the figure below. Top row compares the number, viscosity, and weight averaged molar masses, and illustrates that these averages increase in that order. The bottom row shows the gyration and the hydrodynamic radii, and one observes that the average of the gyration radius always exceed the one of the hydrodynamic radius. The left column refers to compact objects (d = 3), while the right column shows the behavior for mass fractals with d = 1.7. The latter values are systematically smaller. The results of the log-normal distribution are systematically larger than the ones obtained from the exponential one.