Our research focuses on fundamental physical and analytical chemistry of colloids, surfaces, and polymers. In particular, we experimentally investigate forces involving colloidal particles as relevant for particle aggregation and deposition processes. Adhesion between particles is investigated in terms of single molecule force spectroscopy. The main analytical tools used are light scattering, atomic force microscopy, and surface sensitive techniques, and more details on these instruments are given here. We are interested in the charging mechanisms of simple ions and polyelectrolytes and how these solutes affect colloidal interactions. The results are analyzed in terms of classical and recent theories of adsorbed layers and surface forces. We further pursue applications of these fundamental concepts in industrial process control and environmental engineering. More information on these topic can be found below or by following the links.

Aggregation processes in colloidal particle suspensions are initially dominated by the formation of particle dimers as shown in the top part of the scheme on the right. The formation rate of these dimers can be either investigated by time-resolved dynamic light scattering (DLS) or multi-angle time-resolved simultaneous static and dynamic light scattering (SSDLS) [P1]. The latter technique is the only in-situ method currently available to measure absolute aggregation rate constants over a wide range of particles sizes that makes no assumptions concerning the hydrodynamic and optical properties of the aggregates. More details how to measure aggregation rates by light scattering are given here.

Heteroaggregation processes as shown in the lower part of the scheme on the right can be equally investigated by SSDLS [P2]. One can distinguish the homoaggregation and heteroaggeragtion processes through the different optical response of the different aggregates. These studies rely mainly on the multi-angle light scattering instrument more ...

These methods are extensively used to study the aggregation processes in colloidal dispersions in the presence of simple salts or polyelectrolytes. Aggregation in silica dispersions was found to be highly dependent on the surface properties of the particles, and in one case silica particles were found to obey the classical theory of Derjaguin, Landau, Verwey, and Overbeek (DLVO) [P1]. Detailed studies were carried out concerning the influence of polyelectrolytes on the stability of oppositely charged particle suspensions [P3]. The main finding is that with increasing polyelectrolyte concentration, suspensions are destabilized at first by charge neutralization, and then restabilized again by overcharging. More recently, effects of multivalent ions on the stability of colloidal suspensions were investigated. While conterions of low valency destabilize suspensions by simple screening, already for trivalent or tetravalent ions the charge neutralization and overcharging mechanism set in. Multivalent coions also lead to destabilization, but in a lesser extent. These situation can be understood in terms of the Schulze-Hardy rule (for counterions) and the inverse Schulze-Hardy rule (for coions) [P4]. 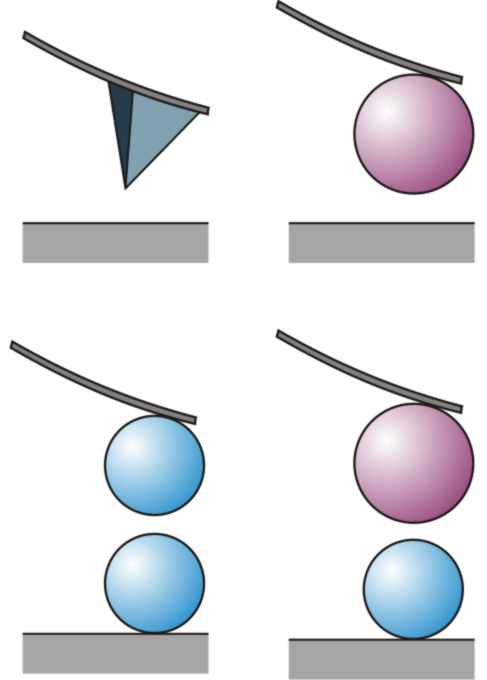 The atomic force microscope (AFM) is normally used in high-resolution imaging of surfaces. Thereby, one scans a surface with a sharp tip as shown in the scheme on the right. This technique has become a very popular tool to image various substrates, and it is also much used in our laboratory to image surfaces, particles, or adsorbed polymers. More frequently, however, we use the AFM as a force balance in order to measure surface forces by attaching a colloidal probe (i.e., micrometer-sized spherical particle) to the AFM cantilever [F1,F2]. The technique can be used in the sphere-plane geometry, or by attaching a second particle to the substrate, in the sphere-sphere geometry, see scheme on the left. We have further developed the multi-particle colloidal probe technique, which permits to directly measure forces between colloidal particles in a suspension [F3]. Various AFMs are used to carry out these experiments, more ...

With the colloidal probe technique, the nature of forces acting between charged particles in the presence of polyelectrolytes of opposite charge was investigated [F3]. Away from the charge reversal point, the particles mainly interact with electric double-layer forces. Near the charge reversal point, van der Waals forces dominate. These forces are considered in the classical DLVO theory, and sometimes are sufficient to describe the main interactions. In other cases, additional non-DLVO attractive forces become operational, which probably originate from the patchy charge distribution within the adsorbed polyelectrolyte film. In the case of like-charge polyelectrtrolytes, the interplay between oscillatory structural forces and an the non-exponential double layer forces could be clarified [F4].

Cationic polyamidoamine (PAMAM) dendrimers adsorbed on negatively charged particles induce similar forces as linear polyelectrolytes, except that the influence of the patch charge forces is most pronounced. Such adsorbed dendritic films are very loose and the adsorbed dendrimers may undergo conformational transitions [F5]. Adsorbed dendrimers can be investigated by AFM imaging and other surface sensitive techniques, more ...

Adhesion between surfaces coated with polymers or polyelectrolytes is often determined by the mechanical properties of bridging polymer chains. Such processes can be studied either with the colloidal probe or the AFM tip. The most popular technique is to coat the substrate with the polymer in question and record a series of approach-retraction cycles as shown in the scheme above. The tip is normally functionalized to promote the attachment of the polymer. Some of the retraction force-profiles will show characteristic events signalling pulling or peeling of the polymer from the substrate. In many situations, these events originate from single molecules. Another possibility is to coat the tip with the polymer and to record force curves against a bare, functionalized substrate. While events are more difficult to observe with this approach, the events originate from single molecules more frequently. Optimal force resolution of the AFM used is essential for these experiments, more ...

We have used this technique to investigate mechanical properties of dendronized polymers [S1]. It was observed that their elastic response strongly depends on the salt concentration. This effect can be understood by the screening of electrostatic interactions. The colloidal probe technique was further used to investigate the stiffening of polymers in organic solvents [S2].

Adsorption of charged solutes is normally accompanied by a modification of the substrate charge. Such charging processes were investigated in substantial detail for a wide range of substrates, including small ligands, polyelectrolytes, colloidal particles, and macroscopic surfaces.

Cationic dendrimers are weak polybases and they acquire their charge in acidic conditions due to protonation of amine groups. However, the charging mechanism of the polyamidoamine (PAMAM) and polypropyleneimine (PPI) dendrimers is rather different. The amine groups in PAMAM dendrimers are widely separated, and therefore they behave almost independently [C1, C2]. For this reason, the more basic primary groups at the exterior protonate first as shown in the scheme on the right. The protonated groups are indicated with black circles, while the deprotonated ones with white one. On the other hand, the interactions between the amine groups in PPI dendrimers are rather strong, and a protonated group tries to avoid another protonated one in its immediate neighborhood. This mechanism leads to the stabilization of an even-odd shell structure, where only the odd shells are protonated.

These concepts involving interactions between ionizable sites are very general, and can used to rationalize ionization mechanisms for substrates involving a large number of binding sites. In this fashion, ionization of linear and branched polyelectrolytes can be explained [C2]. When the site-site interactions are strong, polyelectrolytes acquire their charge in two steps. For weaker site-site interactions, the protonation occurs in a single step, but this step can be widened with respect to the protonation of independent sites. Planar surfaces bearing ionizable groups also protonate in a single step, but the step can be so wide that it spans the entire accessible pH range. More detailed discussion on such charging mechanisms of linear and branched polyelectrolytes is given here.

Another type of charging process is induced by adsorbed polyelectrolytes or multivalent ions. These solutes adsorb strongly on oppositely charged surfaces. The overall charge is neutralized at first, but since the adsorption process continues, the surface reverses its charge. This overcharing is believed to be mainly induced by electrostatic ion-ion correlation forces, which are neglected in the classical Poisson-Boltzmann theory. However, hydrophobic or dispersion forces might be important as well. The charge reversal process can be easily followed by electrokinetic techniques. In the case of highly charged polyelectrolytes, the process is normally accompanied by a coadsorption of the counterions of the polyelectrolyte, which makes the adsorption superstoichiometric [C3].

Polyelectrolytes represent key additives in the formulation of colloidal suspensions or in process control. Depending on the polymer dose, the same polymer may lead to stabilization or destabilization of colloidal suspensions. Better understanding of such phenomena provides means to optimize flocculants or stabilizing agents in various applications. The photo on the left shows a flow-through sedimentation tank in a waste-water treatment plant. Aggregates of dirt particles sediment in the water column and clean water is continuously decanted from the top. Other applications of polyelectrolytes in industrial processes include retention agents in papermaking or efficient stabilizers of colloidal suspensions. For example, calcium carbonate slurries are frequently stabilized by polyacrylates [A1].

Adsorption processes are crucial in determining transport of solutes in porous media. The transport behavior of interacting solutes can be predicted quantitatively even for complex natural porous materials [A2]. Interaction of colloidal particles with solid-liquid interfaces is closely linked to particle aggregation and deposition phenomena.